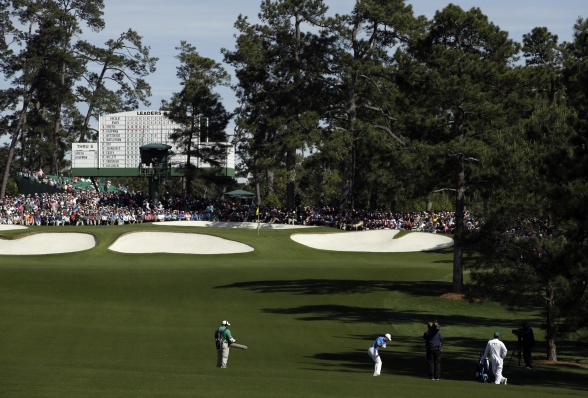 Whenever anyone writes about The Masters golf tournament, it is thrust upon that writer a cosmic obligation to write the following words:

“A tradition unlike any other…. The Masters.” -Jim Nantz

Now that we have gotten that out of the way, I can talk about the tournament itself. This is the most hyped golf tournament in around a decade, and it’s not hard to see why. Tiger is back! It’s only one of the most dominant athletes of all time, plugging away at a fourth comeback attempt. Will he succeed this time around? Probably not. But no athlete is probably so much a part of my childhood as Tiger Woods. And seeing him play, and play well, is no small thing. He has not yet won on tour this year, but he has been in contention. In no sport are the margins between winning and not winning so small as in golf.

Continuing with the more advanced in age, Phil Mickelson won an event (WGC-Mexico) for the first time since the 2013 British Open. He is a three-time Masters winner, and will be in the conversation for contenders this week, partly for nostalgia, partly for his geniality, and partly because he’s playing pretty well.

Next we have the American youths: Justin Thomas, Jordan Spieth, Rickie Fowler chief among them. Justin Thomas is last season’s player of the year and PGA Champions, Spieth already has 3 majors to his name, and Fowler, well, Fowler is a Player’s Champion. Which is a darn good tournament, but have always underwhelmed in the majors, especially on Sunday.

The major factor in the hype for this year’s Masters is simple: it has been a long time since golf has seen this much talent, with this many exceptional players of different generations playing well. Last year’s winner, Sergio Garcia, was on very few people’s radars going into the week, yet he came out with the green jacket, and his first major. In a field of 87 contenders, the odds of predicting this year’s tournament are low. So let’s do exactly that, because it is far more fun than bemoaning the fact nobody gets it right.

10. Tiger Woods: Tiger knows this course better than any human alive, with the possible exception of Jack Nicklaus. That counts for a lot in Augusta. And I think he is physically as good as he is ever going to be. But sometimes that is not enough. This field is stacked, and all phases of the game have to be in line to win this tournament. Tiger’s iron play is close, but not there yet. Let’s hope it will be ready in time for the US Open.

9. Rory McIlroy: Rory and the Masters is quite a sad tale. Not on the level of A Little Life, but the luck has just not been with Rory at this tournament. He comes off a thrilling win at the Arnold Palmer Invitational, which helps greatly. I look for him to have a similar Sunday charge, but only to a top-10 finish, not to the top of the leaderboard.

8. Jordan Spieth: Already an all time great at the age of 24, Jordan Spieth needs no introduction for the golf fan. Two legendary turns have already involved Spieth at Augusta: Winner here in 2015, utter shambles on Sunday in 2016. His play, however, has not been this year at the level of his work from 2015-2017. His best finish is T-3 at the Houston Open, leading me to believe he has some small adjustments to do on his game and mentality before getting back to winning ways.

7.  Kevin Kisner: Kisner has a tendency to play well for 2-3 days in majors, and fade as Sunday wears along. He doesn’t have the driving length of many on this list, and that hurts going into Augusta. But he is an able competitor, and playing well this season, with 2 top-5 finishes. A top 10 at Augusta is nothing to slouch at, should it come to fruition.

6. Dustin Johnson: A lot of Americans on this list, eh? Well, there happen to be a lot of great golfers playing well, who just so happen to be American right now. DJ is high among them. The man is the number one player in the world still, with one win and 4 top-10 finished this year. He’s playing well, but, as theme here, so are many others.

5. Louis Oosthuizen: No matter the year, season, course, or weather, Louis just manages to find a way to put himself in contention on Sunday at a major. He’s a reliable face near the top of any major leaderboard, and I fully expect him to be up there on Sunday.

4. Justin Rose: last year’s runner up seems primed for another stab at a green jacket. A win at the WGC-HSBC, a 3rd place finish at the Arnold Palmer Invitational, and a T-5 at the Valspar indicate another likely good showing for Justin.  A consummate professional and gentleman, US Open Winner and Olympic Gold Medalist, Rose would be a fine addition to the ranks of Masters champions. But I don’t think it is happening this year.

3. Bubba Watson: The 2 time winner of this event has had a brilliant 2018, with wins at the Genesis Open and WGC-Match Play. Bubba always has his length and his putting, two key assets for Augusta. He seems primed for a third win at Augusta, but I think two men stand in his way. Two men who are trending toward the title just slightly more than Bubba.

2. Justin Thomas: I feel like Mugatu (a character in the movie Zoolander) saying this, but, “JT, so hot right now.” Last year, he was player of the year, won five times, won the PGA Championship, and the FedEx Cup. This year, he has won twice: the CJ Cup and the Honda Classic. These winning ways are here for Mr. Thomas, but I think he falls just short this week.

1. Jason Day: I feel as though Jason Day has been in contention at the Masters since time immemorial. In any case, he has never won it. This season, he won the Farmers Insurance Open, and finished T-2 at Pebble Beach. He is playing well, to be sure. But what makes me think Jason Day is finally going to win at Augusta? Well, like Sergio last year, sometimes everything comes together at the right time, in a huge moment of catharsis. I think that Day is ready for his moment of catharsis, but more importantly, he’s in a good position with his play. Let’s just hope his back holds out.

Some honorable mentions, and other names I feel could also put in a shift for Sunday: Henrik Stenson, Bryson DeChambeau, Patrick Reed, Brooks Koepka, Sergio Garcia

I like metronomic defensive midfielders and Uzbek food. View all posts by Tali Raphael